A Serious Warning to University of Gloucestershire Students: They Aren’t Lying To You About Cars (Updated for 2015)

In past years I have written advice for Freshers of the University of Gloucestershire. My friends who work or studied at the uni have added to it. You can find it at Fresher’s Week in Cheltenham: Six Things I Wish I Had Known   This article has been updated for September 2015, with the updates in bold…

This year, a warning. The University has probably told you not to bring your car to uni. You may think this is insane. No, they are sensible. Here is why.

Most housing developments round the college have allocated to them in planning between 0.3 and 0.5 parking spaces per household as far as I can make out. So basically, at best you or your neighbours can park outside your houses.

Now a lot of working families have 2 cars – this is luckily offset by he fact that many people in Cheltenham don’t need a car at all, or can’t afford one, or can’t park the bloody thing. However if a typical student house with 4, 5 or 6 residents (that typical student terraced house was originally built for a family of 2 adults and a kids) all bring a car along – you are going to have hell from your neighbours from Day One. Maybe fortunately, that won’t happen, because you won’t be able to park in your street.

The council has recognised there is not enough parking, so residents – meaning homeowners in the main – can pay £70 or so for a permit which lets them park in their streets, but of course there are only half the number of permits needed.  Most of Cheltenham is covered with these permit schemes, street after street, and you are not going to be able to get a permit.

UPDATE September 2015: The permit scheme has now reached St. Paul’s, so if you park in a street around FCH, and are not a resident of a house there with a valid parking permit, you will be fined £70 each time.  This has already claimed victims in Normal Terrace, because our alleyway does no look like a road and so some of my neighbours assumed the permit scheme would not be enforced here, despite the signs. A friend of theirs who left their car outside cos he had had a few drinks got done on the first day of the scheme.

The permits are assigned at a maximum of two per household; the first one is £50 or thereabouts, the second I believe £100. However I tried to get a second one and was told they were all sold out for my area, and that was on August 3rd, two days after the scheme went live, so I don’t think you are likely to get one.

I’m also going to stray off topic and note that my housemate, a strong willed woman who has lived in the area for  over a decade, no *longer* feels safe on parts of the Lower High Street or around Swindon Road after dark on her own. I have taken to meeting her, but I feel a bit worried at times on the Lower High Street myself now. This is a fairly recent development – within the last year – and there has been added security cameras and so forth after some attacks on women around the Swindon Road/Matalan car park area, but I saw a couple of young ladies chatting tonight in what I thought was a pretty dodgy place where I would certainly not loiter, and they seemed quite comfortable.

Cheltenham is a very safe place indeed, with a few mildly dodgy areas, but a quick search on public data shows between 60 and 90 incidents of “violence or sexual assault” per month in 2015 within one mile of FCH, or about two and a half a day – though incidence is higher in the warmer months, and yet drops over July – no students around? Dunno? You can check out the stats here. A one mile radius of FCH covers most of the town centre, but click on the area button to see.  Now fear of crime is probably a bigger problem than crime at times, and the odds of you being attacked by a stranger are  very low, but please be sensible!

So if you bring a car, where can you park it? Well you can rent an off-road parking space or garage- they are like gold dust, and the one we have costs £800 a year, but anything from £800 to £1000 is reasonable. If you will be driving home every week, or to work somewhere not serviced by public transport, that is one solution. Another is Cheltenham is well serviced with car parks – but it is going to cost you at least that much and involve getting up to put tickets on your car unless you can buy a season ticket.

Now if you park your car near a couple of our sites, its pretty likely to be vandalised, broken in to or wrecked anyway, because these areas are not actually *very nice* – and if you park outside someone’s house, they might just torch your car. Now things are much better than twenty years ago, but seriously, I have lived here for decades now and I would not take the mickey out of the locals around FCH or Hardwick; I am have a healthy respect for my teeth. Violence is uncommon  – I was the victim of unprovoked violence in day time on the streets only twice in all my student years, and I was unlucky — but seriously, as some of my friends who live in St Pauls and can’t get their cars off their drives because the four students in the house across the road all brought a car will tell you — annoying your neighbours is a bad idea in these parts. You are going to have a bad time.

Still, if you figure you can afford the insurance, aggro and prescriptions/dental work, you could bring a car. However what good is it? If you are in Cheltenham in any sensible student housing you are close to either the town centre or Bath Road, and it is unlikely you will need to drive anywhere. I have lived here since 1987 without a car, 27 years now. I went nightclubbng, shopping, and to lectures on all campuses, and was just fine.

Students who park in St Pauls often regret it!

Still you are determined. OK, so you drive to The Park, or FCH, and then what? There is uni permit parking, and some space in the car parks for those with special needs, but they cost.  Otherwise, you can just drive round the streets looking at the permit only parking areas designated for residents, and wondering what the hell you do now.

So don’t being a car. There is a fine inter-campus bus service, which I campaigned for back in the late 1980, so you can thank me later. It has stopped being free a couple of years back, but it will get you from A to B. Or there is the Honeybourne Cycle Path,  Have a look at this guide to cycling in Cheltenham – especially the map. Copies are usually available from FCH and possibly Park Reception.

From FCH or Hardwick it is a minutes ride to a path that leads up to this mercifully flat (no gradients as former railway line) route which will take you up to the Railway Station, where you can cut through on to the Landsdown cycle path to St Stephen’s Road then down to The Park; 2.38 miles of easy cycling. From Pitville Halls cut through by the Pump Room, down the hill to Pitville Park and through to Tommy Tay;ors Lane then join the Honeybourne by the Leisure Centre. Cycling is extremely popular in Cheltenham right now, and if you do run in to the problems you can at least out-pedal any hassle one hopes. 🙂

So yes I have painted a bleak, but I think realistic picture. Use the bus, walk or cycle. Don’t bring your car to university, unless you can afford to pay for parking. It’s going to get even worse as the Permit Scheme finally reaches the far side of St . Pauls and Peters this year,

And hey it’s not all bad. Here are some University of Gloucestershire ghost stories for you! 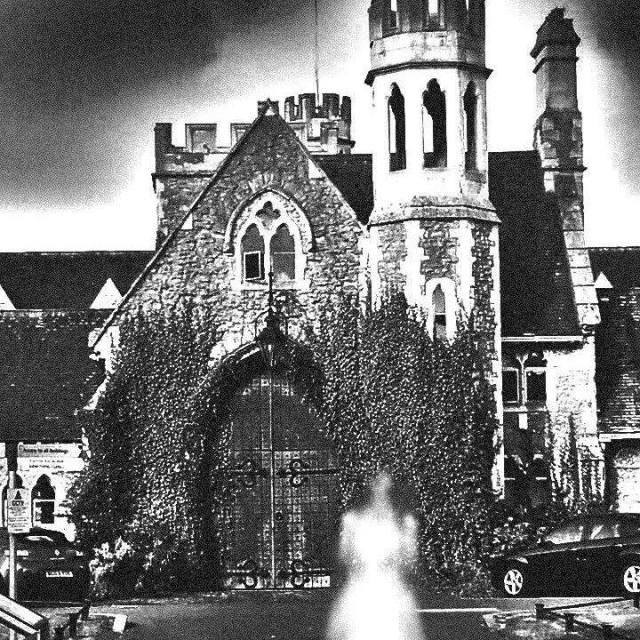 I am a profoundly dull, tedious and irritable individual. I have no friends apart from two equally ill mannered cats, and a lunatic kitten. I am a ghosthunter by profession, and professional cat herder. I write stuff and do TV things and play games. It's better than being real I find.
View all posts by Chris Jensen Romer →
This entry was posted in Student Life in Cheltenham and tagged advice to Freshers, cars in cheltenham, cycling, FCH campus, FCH Cheltenham, Hardwick Cheltenham, St. Pauls Cheltenham, student life in cheltenham, The Park Campus, uni.glos students, University of Gloucestershire. Bookmark the permalink.

9 Responses to A Serious Warning to University of Gloucestershire Students: They Aren’t Lying To You About Cars (Updated for 2015)