It Was Twenty Years Ago Today… (Was I Briefly Sexy?)

It was twenty years ago today, or so the papers tell me, that Nevermind by Nirvana and Blood Sugar Sex Magik by the Red Hot Chilli Peppers were released.

This seems like a good time to reflect; I have an update on the Sally Morgan story later if I have time; but for now, I’m going to think back twenty years to when a miracle occurred. As I joked on Twitter and Facebook, twenty years ago I was for a short period considered sexy and fashionable, and college girls chased me. As this is actually almost unbelievable, I’m going to talk about how it happened… 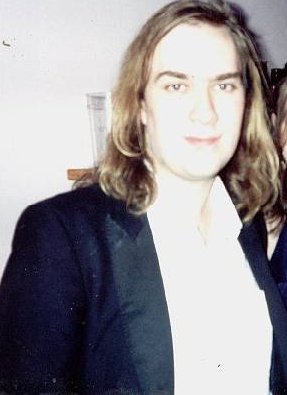 Christmas 1995, CJ at a formal due. This was what my hair was like throughout the late 80's when Tom Cruise was God of Fashion 😉

While I was born in the Summer of ’69, grew up in the drab greyness of the 1970’s, I hit twelve in 1981.  So I guess the first acts I ever loved were Blondie, Kim Wilde, Adam & the Ants, Abba, The Carpenters,  Dexy’s Midnight Runners and oddly perhaps Frankie Goes to Hollywood and Soft Cell. All great artistes, but by 1985 when I met Hugh Wake I had been heavily influenced by Axel Johnston’s tastes, so punk bands and indie pop were important to me. The Smiths, The Sex Pistols, the Buzzcocks, etc. Axel introduced me to two bands who were to have an overwhelming influence on me – David Bowie in his Ziggy Stardust phase, and as I already loved Bauhaus from their 1982 cover of Ziggy Stardust that was a natural progression, and the biggest influence of all Lou Reed and the Velvet Underground.

SO I started to get in to music, and after a while I stumbled across the Beatles, from my sisters old records still hanging round the house, and then I’m still not sure how I one day decided to try Jefferson Airplane, and never looked back. So while the lower sixth were getting in to Goth, and I was a huge fan of the Mission, Cure and Sisters of Mercy, I was also listening more and more to 60’s psychedelic bands.

Why is this relevant? Because by 1987 I had grown my hair long, and resisted the urge to wear all black (though I often did), and was more an more wearing flares, experimenting with tie dye and generally getting more and more hippy. By the time i went to uni in September 1987 I had already taken to adding “…man!” to every sentence and talking like a stoner, even though I wasn’t one. Still in 1987 I arranged a few “Happenings” in Fullwood Halls of what is now the University of Gloucestershire, and painted my bike a bit more white before I ran out of Humbrol Enamel, announced property was theft and left it unlocked telling people they could use it to go from campus to campus. It lasted a couple of terms; meanwhile my CD collection, which was large for the time, and my room became open property anyone could use. To the credit of my fellow students, it worked well.

I was reading more and more about the Levellers and the Diggers in the English Civil War, communes in the counter culture in the 19th century, anarchism and anything I could lay my hands on on the 60’s SF Haight-Ashbury scene. the twenty year anniversary of Sgt. Peppers Lonely Heart’s Club Band in summer 1987 was almost a religious celebration to me; and the quiet Bury St Edmunds lad became more and more a freaky hippy.  My room reeked of joss sticks, and I was more and more wildly Romantic. It was about this time Dave Curtin labelled me “the Byronic Man”, as I started to read Coleridge, Huxley and as much as I could on philosophy of religion, mysticism and Magick. “Do what thou wilt with the hole in the floor!” said a sign on the door of my room, B36, and the Christian Union became more and more concerned about both my bad jokes and the curious passion I had for Aleister Crowley’s wicked sense of humour and in contrast the radical Nazarene. My discovery of Dorothy Day and the Catholic Worker movement occurred about this point — I was now a full flung student anarchist hippy idealist Romantic. 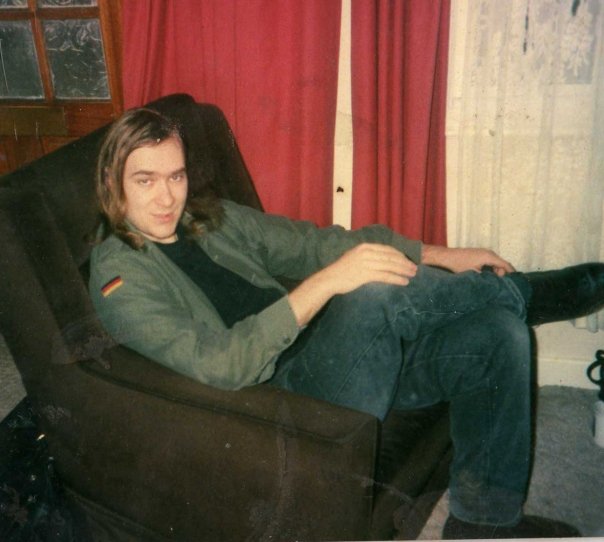 CJ in his attempt to look respectable for work, early' 1990s.

In short I had become the epitome of an late sixties/early seventies student, at a time when style was rigorously dictated by the film Top Gun; military short hairstyles, shorts, jackets and chino; yuppie was in with filofaxes, and Rick Astley, Jason Donovan and Kylie dominated the charts with the wonders of Stock Aitken and Waterman, week after week of what now strike me as brilliant perfectly crafted pop.  I was completely outside the mainstream – there were not even any goths around that I knew, and only the metal fan Mark Leech had long hair, his much longer than mine. Looking at a picture of Dave Curtin from those days he looks a bit like Nik Kershaw, at least hair wise!

When Hugh arrived at uni, we were the long haired scruffy freaks, I wearing oddly misshapen baggy M&S pullovers or chunky knit black wool over torn faded and often painted jeans, with flowers and Pop Will Eat Itself logos mixed with New Model Army and All About Eve imagery. I briefly took on a Joy Division inspired look after I discovered C&A sold a range of black shirts, and while in my second year we studied Origins of Communism and Fascism, but I was always an anarchist at heart. Ultimately though I dressed like the poorest elements of Working Class Suffolk; my clothes if I had topped them with a Massey Ferguson cap were those of the agricultural labourers I grew up with, with a hippy accessories. Hell I even wore bells from time to time!

And I found God…

About 1989 I got my first leather bikers jacket, later painted around 1993 with a Futurist style piece of art by Polly, with a quote from Laibach. Yet I never consciously thought about fashion as far as I know: while formality and looking “up market” and affluent became more and more popular, I inadvertently drifted in to a style that was to become famous as Grunge. I had no idea what was happening in Seattle – I was listening to the Thirteenth Floor Elevators and other obscure 60’s psychedelic bands. I had absolutely no idea of the Madchester scene, and that others were going the same way: Marcus played me some early Inspiral Carpets, but my one concession to modern music was Pop Will Eat Itself, and I really had no idea what was happening  outside the confines of my small Church college.

The imagery is so Huxleyian/Castanedasque: Heaven & Hell…

I’m not going to talk about my girlfriends etc; it’s irrelevant. But in 1991 with the release of Nevermind (though it took a good year before it hit our college I think) I was suddenly gloriously and briefly in fashion, and in the early 1990’s I went from being terrified of women to being utterly petrified, as suddenly girls, strange frightening creatures who had always ignored me (and I them – I hit puberty very late!) started to pursue me. I was lucky I had a very sweet girlfriend, who I think I am still friends with today, and was often oblivious to all the attention. Hugh Wake actually dealt with the attention in very amusing ways, with some of the best lines ever that he adopted I think to scare off the indie girls — but it would be unfair to tell the story of the Angry Young Woman, and whose unfortunately brilliant inadvertent put down. Happy times!

Yes I looked awful back then!

And what did I think of Nirvana? As far as I know I had never heard of  grunge, the Lemonheads, the Smashing Pumpkins, Red Hot Chilli Peppers, etc, just as I was almost oblivious to the Stone Roses and the Madchester scene.  By the middle of 1993 I was night clubbing most nights of the week, and by 1994/95 I was an occasional DJ, but really I had very little idea of popular culture back then. So I am the worst person in the world to tell you what Grunge meant to the mainstream, because I had no idea. As my hippy idealism waned, and I struggled to work out how to cope with the “real world” post-uni, and I became utterly disenchanted with drugs and radicalism, I retreated in to something like what I have become today. I have always been a little non-conformist, bohemian perhaps, though that may be far too strong a word for someone who is essentially very mild mannered and quite happy to let others live as they please, and prone to occasional burst of wild energy and dangerous enthusiasms — but Grunge really meant nothing to me.

I knew the Lulu version of Bowie’s song…

but I was “closer to the Golden Dawn, immersed in Crowley’s uniform of imagery…”

Looking back on it, I think Nirvana were one of the greatest all -time bands, and Kurt Cobain a fine artist and poet. Sturm und Drang, or whatever the funny old Germans call it. I was a confused victim of their popularity, seen as ahead of fashion, a trail blazer, hip, cool and event to some misguided ladies sexy.  I wasn’t,  I just was being what I was, and had finally dropped all the hippy stuff, and dropped the Ziggy-esque roles I had cultivated, and had emerged in to adulthood scruffy, bedraggled, unshaved and somewhat slightly dazed. I was no innovator: I was simply clueless.

(with one of the best playouts in rock…)

So twenty years ago today the world changed on me, and it took me a decade to realize why I suddenly could talk to women and actually really liked them, and to be convinced I was, to some attractive. But if you ask me what Nirvana meant to me: it meant nothing, for I was oblivious.

Such are the accidents that make up a personality and a life. A small town boy, average in every respect, I owe a lot to Nirvana…

(and here to end the first grunge track I ever heard…)

I am a profoundly dull, tedious and irritable individual. I have no friends apart from two equally ill mannered cats, and a lunatic kitten. I am a ghosthunter by profession, and professional cat herder. I write stuff and do TV things and play games. It's better than being real I find.
View all posts by Chris Jensen Romer →
This entry was posted in Uninteresting to others whitterings about my life and tagged Axel Johnston, David Curtin, Grunge, Hugh Wake, Marcus Holland, Nicola Jordan, Nicola Talbot, University of Gloucestershire. Bookmark the permalink.