My Own Ghost Story

OK, here is my ghost story. It was the reason for my involvement in parapsychology, and almost twenty years on I believe it to be true, but no longer can rely on memory. This account was written in 2001 (for a book introduction, hence narrative/genre style).

“It was 1987 and I was at a wargames meeting with four friends, all aged about the same as me – I was the youngest at just about to turn 18. We were driving through a town called Thetford in Norfolk, England, when one of us needed the loo badly, so we turned in to a cul-de-sac off the flyover which runs through the middle of town, looking for an alley or something for a call of nature!

At the end of the lane we stumbled across one of those delightful secrets English medieval towns spring on you – flanked by modern housing estates we found a medieval Priory, laying in ruins, built of the local flint stone and clad in ivy. A sign in the car park informed us that it was Thetford Priory, a victim of Henry VIII’s Dissolution of the Monasteries in the mid-C16th.

Well we were not that enthralled by this (we were from Bury St Edmunds with its beautiful monastery ruins), but we wandered through the evening light – it was about 8-8.30pm on a warm August day, (August 8th 1987) which in England means it is still light, day in fact – and eventually found a secluded part of the ruins, where the urgent business could be undertaken behind a bush. As the other chaps gathered we turned to look at the ruins one last time.

It was then we became aware of a joker wearing a black sheet over his head, pretending to be a ghost. I think it was Darren who saw him first, and remarked on this guy in a very light hearted tone – he was looking at us from a first storey (thatone above the ground) window, and was obviously watching us. Now if you imagine someone whose skill at Halloween costume making seems to go as far as throwing a bed sheet over his head, well that is what we saw – at least that is what I think I saw! 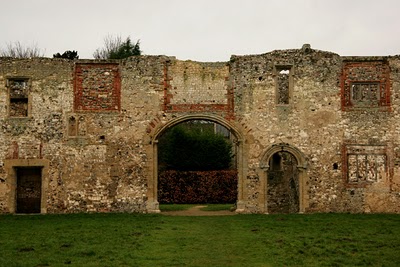 The small arch to the right of the main arch is where the staircase was.

Darren, being the most headstrong of us said ‘lets scare him!’ and charged forwards, towards the facade of the building, which has one large arch and a smaller one in which there was a staircase up to the room we had seen the chap in. As I followed, partly to restrain Darren, partly in a spirit of Scooby Doo ‘and I’ve of gotten away with it if it wasn’t for you pesky kids’ I’m not sure what I was thinking.

And then we saw him coming down the stairs – the sheet billowed out like a woman in a ball gown, and there were three dark spots on his stomach area. At least that’s what I saw, and as I was running – well I was not the most observant. We threw ourselves up the staircase at the guy, who was now well within reach, halfway down the stais; which is why our impact with the flint wall at the back of the room came as a surprise. No stairs existed.

There was no floor in the room the figure had stood in. I struck my head, as did Darren. We were both nauseous, and I felt like i might vomit a few minutes later. There was also a distinct feeling of coldness, and I completely lost the plot.

Thetord Priory: from "The First Mousetrap" site which interested me - the photo is a link...

What had the others seen? Well everyone agreed that there was a very real and very tangible staircase. They all also agreed that there was a figure, though David described it as a smoky mass – but if he did not think it was a joker in a sheet, why did he not challenge our statement before? Axel said it looked like a monk – but any shadow can look like a monk, hence the hundreds of spectral monks said to prowl English towns. Marcus later described the figure as like spiderman in a black costume.

Anyway on the way back we had a curious mix of nausea and extreme emotional reactions, along with a strong feeling of being cold, and a lot of shakiness. Eventually we got home (16 miles) and on the way David forbade us to discuss what we had seen. Only David had any previous belief in the paranormal, and he suggested we created independent signed testimony. . The statements were kept, and then compared – it was then that the fairly major differences in the description of the figure first came to light – apart from an agreement on the staircase, the figure being male, and wearing black, there was however a complete consensus on the order of events.

There was one more rather bizarre aspect to this sighting – as we left the Priory we had a sense the building was in somehow rebuilding itself, making its self more real, around us. Axel shouted ‘jump the walls – break its reality’. We missed that off the documentary – it sounded too sensational. Yet it was exactly what I felt, and evidently Axel too, and as I ran for the car I also felt as if with every step I was plunging deeper in to mud or wet sand – possibly a physiological response to extreme fear, the legs turn to jelly sensation.

At this point I had a major crisis of belief. At that point I was an absolute atheist materialist and advocate of scientific reductionism, despite my family’s firm belief in spooks etc, maybe because of it. The experience convinced me that people did see ‘ghosts’ – that experience is genuine. What those ghosts are – hallucinations, tricks of the light, abnormal mental phenomena, ESP, spirits of the dead, demons cavorting, whatever – I did not and still do not have sufficient data to judge. It just became obvious to me that people had profoundly unsettling experiences which were hard for those who had not been there to relate to, and which lead you to question your sanity, your place in the world, and what the heck really happened.”

I welcome any comments. My position: the experience of having encountered a “ghost” is undoubtedly a real experience, but that tells us nothing of the mechanisms or causality underlying the experience. I recently asked the lads what they thought we experienced that night — now if the confabulation theory is correct, we might ahve expected the story to grow in the telling. Tow responded – Marcus wrote

I remember me, you, Munch, Axel and Darren going to the Priory on a misty night. We all (even me the arch sceptic saw a stairway in that door way.  Some of the rest of you (Axel and Dave esp) also saw a monk with some stab wounds. We all freaked out and ran off for a bit. When we came back nothing was there apart from a ‘vibe’. There you go that is all I can remember, it was circa 20 years ago.

TBH Chris, I have very limited memories of the event.
Dave, Darren, Marcus, you & I were there.
We say a black, robed figure come out of the arch.
We ran away.

Now bear in mind this is despite having occasionally discussed the story between ourselves over the years, and having even featured on a documentary show talking about it in 1996. We really now have very little idea of precisely what happened that night — and I don’t think any of us would pretend otherwise, though I have not heard back from Darren or Dave. Still that in itself bears out one of the findings of the Census of Hallucinations – and makes me doubt the widespread assumptions that stories of ghost experiences grow in the telling, or are crystal clear in the memory.

I’d just like to take this opportunity to thank those who have donated so far to the blog; you know who you are, and i think I have talked to each of you, and to the gentleman, he knows who he is, whose sixty pound donation astonished me and means that I have food and electric till my next money comes through. What can I say but a very sincere thank you to you all?

I am a profoundly dull, tedious and irritable individual. I have no friends apart from two equally ill mannered cats, and a lunatic kitten. I am a ghosthunter by profession, and professional cat herder. I write stuff and do TV things and play games. It's better than being real I find.
View all posts by Chris Jensen Romer →
This entry was posted in Paranormal, Uninteresting to others whitterings about my life and tagged ghost experiences, ghost stories, ghosthunters, ghosts, Paranormal, spooks, Thetord Priory. Bookmark the permalink.

25 Responses to My Own Ghost Story